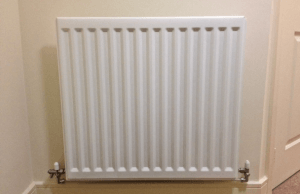 So, what’s it to be? You’ve decided to refurb a room and now you’re left wondering about the heating. Which type is going to suit your needs best? Will it be the old traditional central heating radiators or the newfangled underfloor heating system that you’ve heard so much about?

Let’s take a look at a few pros and cons to see if we can shed some light on this, the War of the Warmers.

As central heating radiators rely on convection to heat a room they are immediately at a disadvantage when it comes to being efficient at what they do. This is because the heat is often coming from one single source (the radiator) which only heats the air around the source itself, not the whole room.

The rest of the room is warmed via the convection air currents generated by the hot air rising and thus pushing the cold air downward, leaving the floor area cooler than the ceiling. This is a far from effective way to warm a room, especially if you have high ceilings.

Underfloor heating systems, on the other hand, warm a room from the floor up. This heat is transferred mainly by radiation, not convection, which gives a much more even distribution of heat and results in a warmer floor and cooler ceiling area. As far as I’m aware, the only person who wouldn’t want this is Lionel Richie! 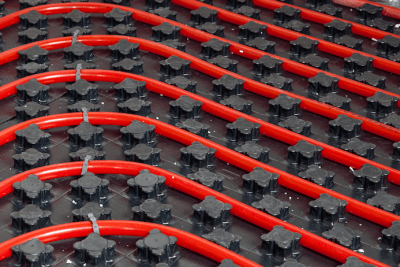 This is a clear win for underfloor heating, regardless of whether you have a wet or dry system. Once in place, everything is hidden from view and there are no great hunks of metal stuck to your wall.

If you only have limited space to work with, having a radiator take up one of your walls can be a real pain when you’re planning the design of your interior.

With UFH you can have your furniture wherever you want to put it – without worrying whether or not it’s going to affect the temperature of the room.

Guess what? Yep, it’s another win for UFH. Amazingly, with underfloor heating, you can have your rooms at a lower temperature and yet still feel warmer than if you had central heating radiators instead. This is due to the way they warm a room; with radiation as the primary method, rather than convection.

As they distribute their heat far more evenly than radiators, UFH systems can run at far lower temperatures. To get a room to a comfortable level of warmth, wet UFH typically needs the water to be anywhere between 35-60°C. Temperature levels are dependent on whether the piping is embedded inside screed (lower temperature) or underneath a timber suspended floor (higher temperature). A radiator, on the other hand, needs to get up to 70-80°C.

One thing you should be aware of is the difference in energy consumption between wet and dry UFH systems. Electric UFH will cost more to run than a wet system, but the initial install is cheaper. 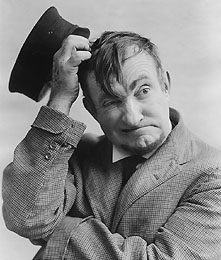 Oh my, this is getting a little embarrassing for the ‘rads’.

While radiators may require very little in the way of maintenance, UFH systems require even less. Bleeding, cleaning, flushing and all the rest will become a thing of the past with underfloor heating.

The only thing that really needs checking once a year is the manifold. Just a quick once over to ensure that there aren’t any leaks will suffice, but it won’t hurt to check the valves flow rates as well.

People often worry about the piping once it’s laid but there really isn’t any cause to. Inhibitors can be added to the system upon installation to reduce the risk of corrosion and prevent any residue building up within the pipe network. However, it is vitally important that you buy the correct product for the job and use it at the recommended concentration.

All good quality piping is manufactured to have a smooth internal structure so that if there was any build-up, which is extremely unlikely, it would simply pass through anyway.

This is something that many people don’t even give a second thought to when considering whether to get rid of their old central heating radiators or not.

As we explained in our article about the health benefits of a UFH system, the advantages to installing a underfloor heating system are not solely beneficial to the environment. It’s another win for UFH. 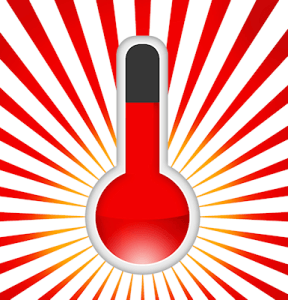 Hello! What’s this? Is a comeback on the cards, or is it merely a consolation prize? The radiators have pulled one back!

One downside to UFH is that it can take a while to get going. Radiators, however, warm up very quickly indeed and can give a cold room an almost instant injection of heat. This difference occurs for two reasons.

Without wanting to steal the old rads thunder, there is a way round this. As the operating cost is lower, it is possible to have the UFH system on for longer without adversely affecting your energy bill too much.

So, this means that you can avoid cold rooms altogether by having your underfloor heating running constantly at a lower temperature throughout the winter months. Sorry radiators, just saying.

Anyone who has lived with central heating radiators of a certain age will know what noisy bleeders (pun intended) they can be. Sometimes they can give you the fright of your life if you’re not expecting it. UHF is quite different – much more refined, don’t you know.

While each system is different – and a lot depends on the quality of the fitters too – UFH is generally a lot quieter than the old rattling radiators. 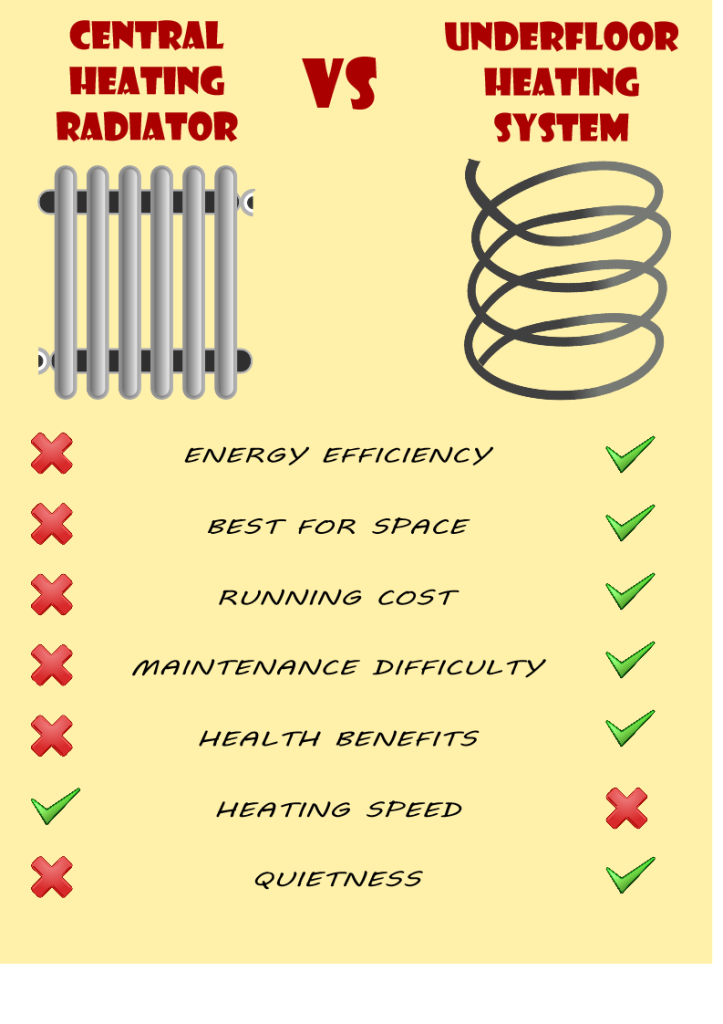 There you have it. A resounding 6-1 victory for underfloor heating systems everywhere. Hang your heads in shame central heating radiators, you’ve been thrashed!

Tell us which way you’re going to go in the comments box below.